Beauty in the Waste, art by Tess Felix 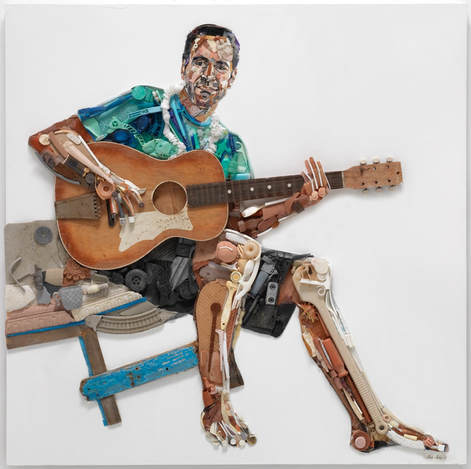 "Jack Johnson", commemorating Jack and Kim Johnson's Ohana Charitable Foundation
There is beauty in everything. Even garbage, but only after Tess Felix has applied her artistic skills to it. A California-based artist, Tess has gained fame from her collages made entirely of garbage found on Stinson Beach. Her first collection “An Ocean in Crisis” was created after a storm brought in a wave of ocean debris, blanketing the beach until “it was like a colored carpet at [her] feet.” It was this terrible reminder of the human effects on the ocean that was the start of something beautiful. Tess had always wondered how to help fight against Ocean pollution, despite not being a scientist nor politician. With her portraits, Tess uses humor to portray the serious issue of plastic pollution.

Tess does not paint or color the debris that she finds for her portraits, she finds every hue that she needs after one of her “discovery” sessions as she calls her cleanups. To create her classical portrait-style collages, she interviews then photographs the subject to better know them. In the past, she has done portraits of her friends and family and historical figures. Currently, she portrays eco-heroes who inspire her such as Stiv Wilson and Captain Charles Moore, with whom she traveled and studied the Pacific Garbage Patch up close.
Check out her website here.

Margo and the Baja BCUS
​
Hanna: Point Reyes National Seashore Has a Protector

Logan: A Day at the Beach with an Ocean Warrior

Inspiring Stories From other Sources

Daring Rescue of a Whale

Cleaning up trash can make you infectiously happy; a sample from Estonia:

Saving Valentina: With only a small knife on hand, people work hard to free a whale trapped in fishing net.
Watch the whale’s response!

Mahalo from Kealakekua!
​In March 2011, a tsunami pulled a large house into Hawaii Island’s Kealakekua Bay, a resting place for pods of spinner dolphins and humpback whales. The local community removed tons of toxic debris from the Bay, shown in this inspiring video of citizens taking action to protect what they love.